In 2013 my son, Francesco “Frankie” Enrico Ventura, was the one in all of these.

My name is Lisa and Friday 29th November 2013 was the worst day of my life when my son Frankie was born sleeping at the Worcestershire Royal Hospital. He was born with a severe cleft lip and palate, talipes and he also had chromosome 15 duplication syndrome. I’d had six previous miscarriages over a ten year period, and at the age of 40 I thought I was finally on my way to having the baby I so desperately wanted.

Through the devastation of losing my precious Frankie and bringing home a memory box from Towards Tomorrow Together instead of my son, of arranging his funeral, of him being brought home in a tiny casket box after his funeral, I knew I could not let his memory die. He existed, and I wanted his existence to mean something and to help others. And so “Frankie’s Legacy” was born.

Through blogging, article writing and articles in the press I am raising awareness about early pregnancy loss/miscarriage, stillbirth, neonatal death, cleft lip/palate, rare chromosome disorders and hyperfertility, which I was subsequently diagnosed with after a further 4 early miscarriages.

I also run campaigns in the press including “Communication Matters”, which aims to help improve communication between healthcare professionals and parents to be when delivering sensitive and in some cases bad news. Additionally, I offer support for those who have suffered and early pregnancy loss, stillbirth or neonatal death. I offer this through 1-2-1 support via Skype, the phone, Facebook and other appropriate online mediums.

“Frankie’s Legacy” as a blog and entity has grown extensively since it was launched in early 2014. It has been featured regularly in the local and regional press, been featured on BBC Midlands Today and I’ve been on radio countless times raising awareness of stillbirth and early pregnancy loss. I am very proud of how much that has been achieved in a very short space of time, a time through which my husband and I have gone through and suffered the death and loss of several other close family members and further multiple miscarriages, and we are extremely grateful for all the support we’ve had. 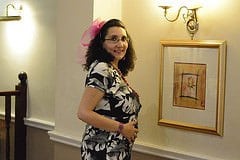 Although I miss my son with all my heart, and wish he was in my arms, his legacy lives on. I am currently writing a book called “Frankie’s Legacy: Love, Loss, Grief & Recovery From Early Pregnancy Loss And Stillbirth”, and I have plans to write more books; “Everlasting Footprints” will be a collection by parents who have suffered a stillbirth, and I plan to write a book from the Dad’s perspective of stillbirth and early pregnancy loss with my husband’s help, and a series of books about living with cleft lip and palate from birth to adulthood. Eventually I want to get involved with research into rare chromosome disorders and to raise more awareness of it and cleft lip/palate, and to help with providing much needed training for midwives and health professionals so they can be more aware of stillbirth and how to support those who go through it.

Every day is a struggle, and my world was turned upside down from the moment I was told that Frankie had a severe cleft lip and palate at a scan I had when I was 23 weeks pregnant. It takes everything I’ve got just to get through each day, to get up every morning, dust myself off and face the outside world. But I know my Frankie wouldn’t want me to mope, and that’s why I have created this blog “Frankie’s Legacy” in his memory.

There is a quote that goes, “Don’t be sad because it’s over, smile because it happened.” While I am devastated beyond words at the loss of my precious son, I am also glad it happened because Frankie gave me the gift of motherhood. Through him I experienced carrying a baby, to feel him grow inside me, to feel him kicking and to know he was there, waiting to come into the world. And if I never have another baby, I know that I am a mother, thanks to my Frankie. Through his existence he is helping so many, and my husband and I will ensure that his memory and legacy lives on until our dying day.

If you are reading this blog and the posts on it, I hope that they bring you some small comfort.