So after a very long weekend where time seemed to go at a snail’s pace I finally head up to Birmingham Women’s Hospital.  It wasn’t a bad weekend considering every second felt like an eternity and my husband even made progress on finishing off the decorating in baby Frankie’s room, which was beginning to take shape quite nicely.

My Mum took the day off work to come to Birmingham Women’s Hospital and my Dad came with us too.  We headed up the M5 in silence for most of the way, my heart was racing and I felt sick to my stomach.  My husband was driving my Dad’s car and my parents sat mute in the back.  I don’t think they really knew what to say.

We got there about 20 minutes before the appointment and were called in on time.  I don’t know why, but as I got on the couch for the scan I just lost it and started crying.  The sonographer was a lady this time who said that she wouldn’t talk or say anything until she had completed the scan.  I was so upset she brought a midwife in, but the midwife just stood there and didn’t really know what to do or say.

When she finally finished, which seemed like an age, she said he definitely had a cleft lip.  I cried even more at that point as I dared to hope that the guy at the Worcestershire Royal Hospital was wrong, or that there had been a mistake and that it was all just a horrible nightmare that I would be able to wake up from.

We were ushered into a room and left on our own for a few minutes.  When she came back she said he definitely had a cleft lip, still no mention of palate although that didn’t mean he didn’t have a cleft palate, and offered us the option of having an amniocentesis test.  I couldn’t think straight so she went on to say that it only detects chromosome abnormalities and can’t guarantee that it would find anything, that there was a risk of miscarriage and that even if something was found if I went ahead with the test, if we decided to go ahead with a termination it would have to be decided at a multi-disciplinary hearing, and then went on to describe exactly how the procedure is done at this stage of my pregnancy.  I don’t know how I wasn’t physically sick right there and then in the room.

When we got home I tried to take in everything that had been said.  The best case is that he’s just born with a cleft lip and nothing else, and that can be fixed.  He could be born with a cleft palate, and there could be no way of knowing if he has got a cleft palate or the extent of it from scans.  He could then be born with a chromosomal abnormality, but if he had something it is likely that other indications of it would be picked up on the scans, and all his measurements and everything else about him apart from the lip is absolutely fine.

I decided that I would think positive and choose to believe the best case scenario, which is what my gut feeling was telling me anyway. 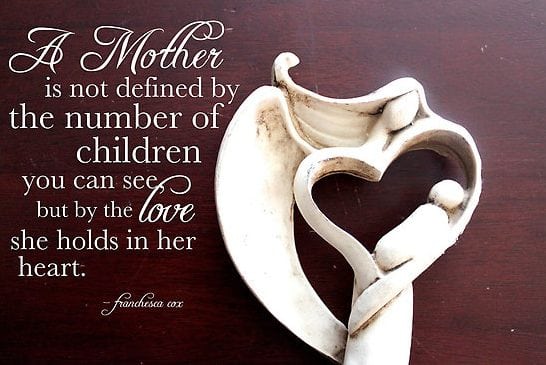 To All Bereaved Mothers Out There On Mother’s Day (International)