Tomorrow is April 1st, also known as April Fools Day, a day where we get to play practical jokes and then scream out “April Fools” at an appropriate point so that people realise they have had a joke played on them.  It is a laugh, a bit of harmless fun and brightens up what could be an otherwise very dull day.  But there is a point where playing April Fools jokes can overstep the mark.

The 2 photos below were of the last 2 positive pregnancy tests I had on February 2nd 2015:

On Friday 13th February 2015, of all days, I lost the baby, my fourth early miscarriage in a year. Those pictures are all I’ve got to prove that I was pregnant for a fourth time since Frankie and that I had a life inside me that died not long after I found out I was pregnant again.

I’ve seen first hand people announcing on social media channels, particularly Facebook and Twitter, that they are pregnant only for them to say “April Fool”! It may seem like a really funny thing to do, and I’m all for a good joke on April Fools day as much as the next person, but please, please spare a thought for those, not just me, who are infertile, who have suffered early pregnancy loss, stillbirth or neonatal death, and are still empty armed.  Even those who have a child who are struggling with secondary infertility or have lost a baby through early pregnancy loss, stillbirth or neonatal death will find this kind of April Fools joke hard to take and upset them greatly.

1 in 4 women have suffered early pregnancy loss, stillbirth and neonatal death so there are far more of us out there than you might think.  Many of them have chosen to stay silent.  I have chosen to do the opposite and talk about what’s happened to me and my experiences.

So please, if you are reading this, consider how you will make someone feel if you decide to announce that you are pregnant as an April Fool joke.  It doesn’t seem so funny now, does it? 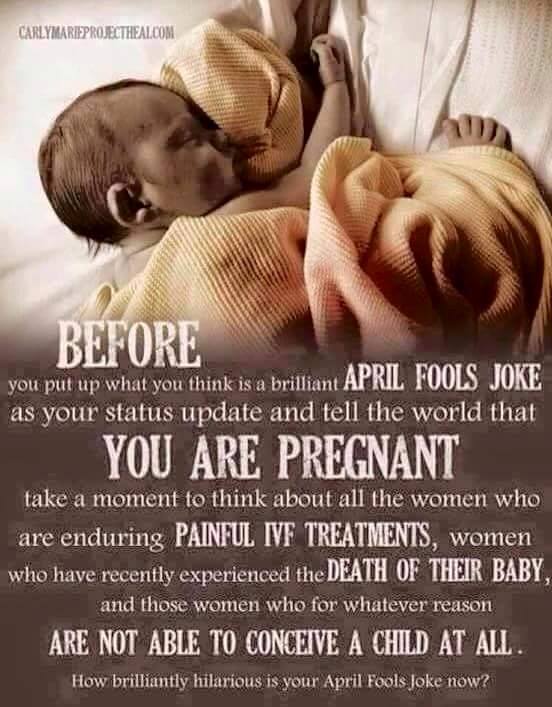 Take My Survey – Please Help Me Make Baby And Cleft Even Better!